If you have clients who will be buying a new home in the next few months or over the next two years, then you need to know about the 2% BC Transition Tax.

"These transition rules are part of a comprehensive package designed to provide equity for buyers of newly built homes and clarity and certainty for the construction industry – an important job creator in our province."

With the end of the HST and the return to the PST/GST system, the BC government chose to introduce the 2% BC Transition Tax as a way, in their words, “to ensure the equitable application of tax for purchasers of new residential homes currently under the HST system” and after April 1, 2013 when the province returns to GST on new residential homes. The government also wishes to replace some of the revenue lost through the return to the PST.

BC’s portion of the HST will no longer apply to newly built homes where construction begins on or after April 1, 2013. Builders will once again pay 7% PST on their building materials (construction inputs). The provincial government asserts that on average, about 2% of the home’s final price is embedded PST that builders pay on their building materials.

The Transition Tax rebate for builders (sellers) recognizes that the builder will not be able to claim input tax credits on the PST paid on building materials acquired after March 31, 2013. The rebate is available where both of the following conditions are met:

The Transition Tax rebate for sellers of new housing will be calculated on the degree of completion of the housing as of April 1, 2013:

The 2% BC Transition Tax does NOT apply to: 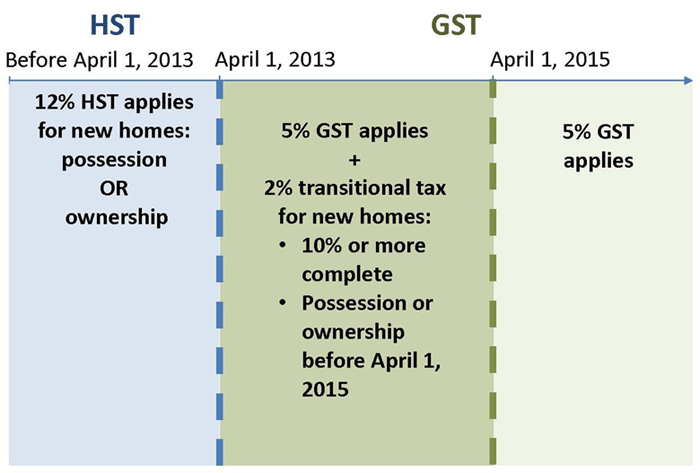 If you have questions, call Harriet Permut, Manager, Government Relations at 604.730.3029.